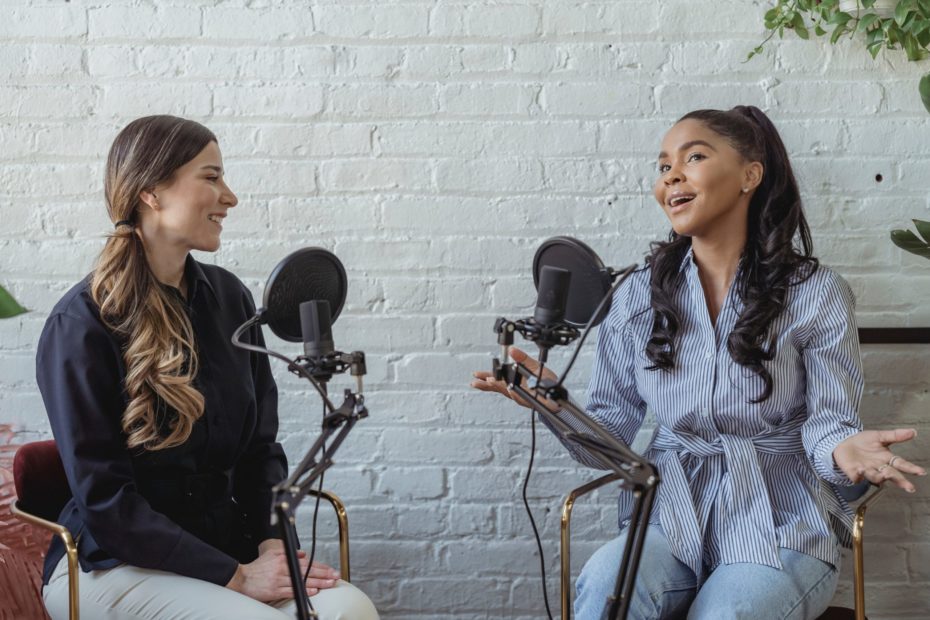 So, if you’re a beginner YouTuber and want to pick up a cheap mic, this list is for you.

Specific details I’ll cover will be:

Quick Look at The Best YouTube Mics on a Budget 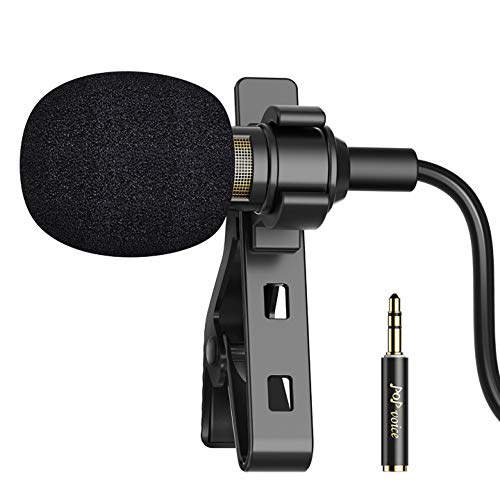 This is in the number one spot for best cheap YouTube mic because it can be used in most cases.

It’s the cheapest lapel mic I could find without sacrifcing on features. Really, anyone starting out on YouTube could get away with using this one.

Lapel mics are also best used if you want to move around a lot.

If you do interviews, you’ll need one of these for each person or you could use a shotgun microphone, but these are usually more expensive.

You could still use it for vlogging or a gaming channel, but you might be better off with a mountable microphone or gaming headset. See below for some options.

The PoP Voice Lavalier Microphone is omnidirection, so it picks up sound in every direction.

This means you don’t have to speak directly into the mic for it to pick up everything you’re saying.

It’s connection type is a 3.5mm jack, so you can record audio with a mobile phone, computer, a camera, or a dedicated recorder.

For a budget microphone the sound quality is better than most people expected. Sound is clear and can even pick up when whispering.

It’s noise cancellation feature performs well even in a noisy environment, so your vocals can be heard clearly without any distortion.

You also get 4 mini windshields to help block out any rustling or wind if you need to record outdoors.

It has a super long cord of 16 feet so you’ll have a lot of room to move around if you need to connect it to something stationary, like a PC or laptop.

The frequency response of the 16 feet PoP Voice microphone is 20 Hz – 16kHz, which is a good response to frequencies for a cheap microphone. 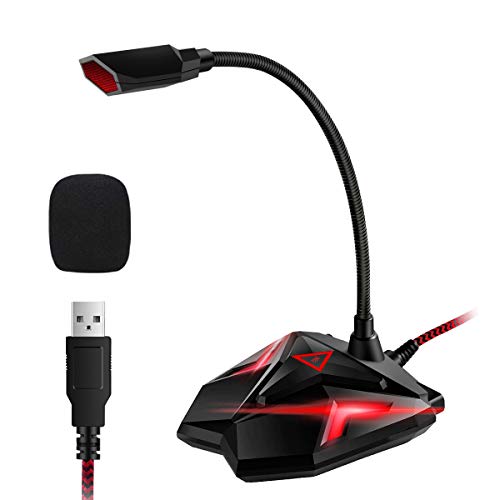 The Eivotor microphone is a USB desk mic which is great for people creating YouTube videos from their PC or laptop.

It’s supported by Mac and Windows 7, 8, and 10 and it can be used for things like Discord or podcasts.

You can also use it for PC gaming if you would prefer a separate mic, instead of a headset.

Its Gooseneck feature lets you point the microphone toward yourself for better audio quality and to make it clearer when recording.

Even though this microphone is omnidiractional, the ability to move it round gives you more control and improvements in its sensitivity.

It has a cool design with red accents.

Another cool feature is the mute button and volume control, which saves you having to control your voice level from the computer.

It comes with a large pop filter to reduce background noise and popping sounds when speaking.

As I mentioned, its connection type is USB and the cable length is 1.45 meters, which should be long enough to reach most desks if your PC is situated nearby.

Its frequency response is 50 Hz – 16 kHz, giving its range of audio recording enough for a first buy microphone. 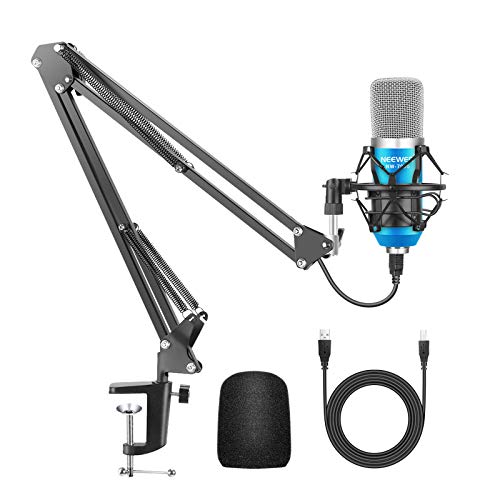 The Neewer NW-7000 is a USB microphone perfect for YouTube.

It’s scissor arm stand makes it an excellent option for anyone wanted to create tutorial or how-to type videos on YouTube.

You could even do talk head videos with the mic in or out of the shot.

The arm attaches to your desk and has two pivoting points which gives it a lot of flexability to move whereever you need it.

It’s a bidirectional mic with a figure-8 pattern which is intended for stereo recording.

Its cable length is 78.4 inches and the connection is USB which requires a voltage of 5 volts to function correctly.

This means your machine will need to be plugged into the mains if you’re using a laptop.

Sound quality has a high reproduction for clear and crisp recording.

The supplied pop filter and windscreen foam cap protects from any poping sounds and the shock mount helps to reduce noise from vibration.

Frequency response is 40Hz -20kHz which is a decent measurment for a microphone at this price. 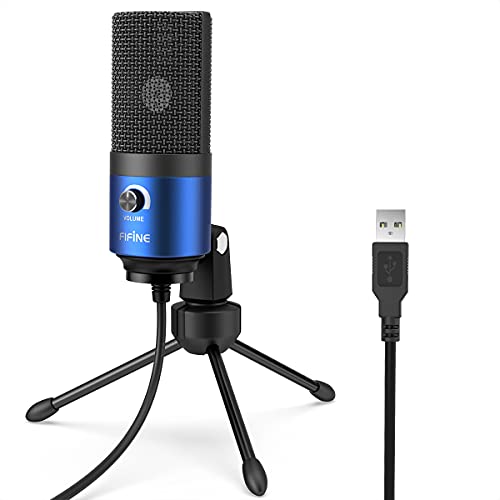 The FIFINE K669L is a USB condenser microphone specifically designed for YouTube videos, voice over vocals, and podcasts.

The supplied mini tripod makes it perfect for a YouTube desk setup.

The tripod allows you to pivot and rotate the mic in different positions for ease of use and better recording angles.

It also has a gain control so you can change the volume in which it picks up sound and even mute completely.

The microphone configuration is cardiod which picks up sound from the front and minimal sound around the back which is great for blocking out background noise.

Device support includes Windows, Mac and PS4, and there’s no need for drivers, just plug and play and you’re good to go.

Cable is USB and 6 feet long which should be plenty long enough for most desk setups.

The sound quality of this mic has excelent feeback from people online, it isn’t the cheapest mic on this list but you might find it’s price reflects the quality.

The only downall is that it doesn’t come with a windscreen or pop filter, but you can buy these separately. Just check the one you buy fits this model. 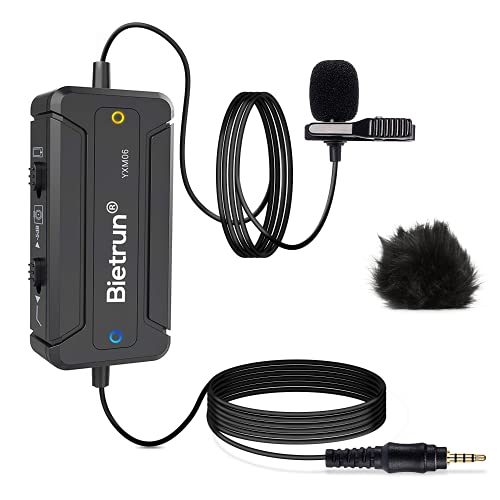 This microphone is another Lavalier option for use with recording Youtube videos, talking head, vlogging, and even interviews if you have one for each person.

The brand is Bietrun and is an omnidirectional condenser mic, which gives lavalier mics the sensitivity and crispness it need for personal voice recording.

What makes this one different from other lavalier mics is that this one has a noise cancelation control unit which significantly reduces surrounding noise.

The built-in microchip helps to boost its sensitivity to clearly pickup vocals but cut out background noise, such as white noise, cars sounds, industrial sounds, and other voices.

You can also use the control unit to switch between many other many devices, like cameras, smart phones, tablets, and PC’s.

The noise cancellation feature uses a built-in rechargable battery which lasts between 45-50 hours. A full charge usually takes around 3 hours.

Its connection type is a 3.5mm auxiliary jack which plugs into any device you want to record onto. Note that you need a recording device as the unit does not record by itself.

Also, if your device doesn’t have a 3.5mm jack, then you’ll need an official USB-C to 3.5mm or Lightning to 3.5mm adaptor which isn’t included.

The standard cable length is 2 meters but it comes with 4 meter extension cord if you extra room between the lavalier mic and device it’s connected to.

Sound quality is excellent for voice recording on YouTube and podcasts.

You can record audio directly onto the device it’s connected to and it will also let you do livestream video calling, but it doesn’t work as a hands free for voice calls.

The Bietrun YXM06 lapel microphone comes with foam windshield and extra fluffy wind muff for outdoor use. You also get 2 metal back clips, a USB charging cable and a storage pouch.

Frequency response for this mic is 20hz -16khz which is a good range for lapel microphones at this price.

I wanted to add a headset option to the list and this is the best I could find for the money.

It’s the Logitech H390 wired headset and it can be used for pretty much anything to do with talking over the internet with other people.

This can include video calls on platforms like zoom and Skype, live streaming on YouTube and Twitch and it can even be used for PC gaming.

Because it’s essentially a mic and headphones in one, you could record YouTube videos with it and upload to your channel, but really, it’s best used for communicating with people in some way.

The earphones are padded for comfort and the mic has built-in noise cancellation so people on the other end can hear you clearly.

The microphone rotates so you can speak directly into it for best results.

It also has inline volume and mute controls so you can mute your voice or turn the volume of the headphones with ease.

Some have even said it will work on consoles such as PS4 and Xbox as the connection type is USB.

The 233cm cable makes it long enough to sit at a desk with plenty of room to move around and even stand up.

Sound quality for both headphones and microphone are fantastic and it picks up vocals perfectly for video calls or streaming for YouTube.

One downfall is has no wind muff so it might not perform best outside in windy weather.

Frequency response rate is 100 hertz – 10 kilohertz, making it a decent frequency for a headphone microphone. 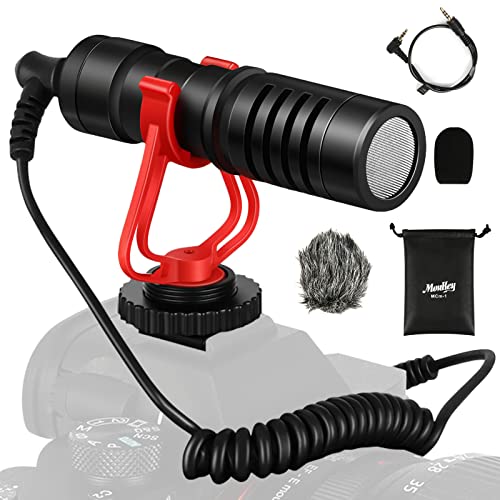 This list wouldn’t be complete without a microphone for a DSLR camera and this one is the best one I could find for the money.

It’s by Moukey and is a shotgun microphone with a cardioid polar pattern, which means it’s uni-directional, so is best for picking up sounds in front of it.

Because you have to speak directly at the camera, it will pick up your vocals clearly whilst blocking out backgound noise from behind and to the sides.

It’s an excellent choice for newbie YouTubers recording videos with their camera and recording sound with a shotgun mic.

It comes with a cold shoe mount which also acts as a shock absorber for protecting against vibration. You can attach the microphone to most cameras and tripods.

You could also use it for a gaming channel and podcast, but attaching it to a tripod might suit you best in this situation. Tripod isn’t included.

The connection is a 3.5mm auxilary jack so you can connect it to and record audio with a DSLR camera, smartphone, PC, laptop, audio recorder, or tablet.

The recording and playback quality are fantastic for such a budget microphone.

It has an aluminum body, which gives extra protection from external interference, such as high level radio frequencies.

The Moukey MCM-1 camera microphone comes with the shock mount, a deadcat windshield, foam wind cover, a 3.5mm TRS cable for cameras, a 3.5mm TRRS cable for smartphones, and a portable leather bag.

The frequency response is 20 – 16000 Hz, giving this mics capabilities a good range of recording.

That concludes these reviews on the best cheap microphones for YouTube.

I’ve chosen to list different types of microphones as people want to record audio for their YouTube videos in different ways.

TechVetted is a blog for creatives, makers, content creators, artists, writers, gamers, and digital entrepreneurs who want the best tech to complement their passion for creating. Read more